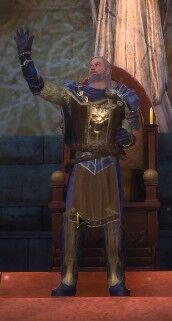 Lord Neverember in the Hall of Justice

Lord Neverember, also referred to as The Protector, is the current ruler of Невервинтер. He can usually be found in the Hall of Justice in Protector's Enclave (which is named after him). Until you reach level 60, it is not possible to to talk to him. If you approach him, a nearby guard will stop you and initiate a dialogue sending you away. Following the completion of the quest An Audience with the Protector at level 60 Neverember becomes a quest source.

Lord Neverember has his origins in the city of Waterdeep, he also holds the title Free Lord of Waterdeep. However, he is not the king of Neverwinter, although he has the Crown of Neverwinter in his possession. His agenda is to reconstruct the city. His main political opponents are the Nasher Rebels, followers of a previous leader, who will sometimes refer to him as "The Pretender", a pun on his title "The Protector".